Dr. Abdul-Massih Saadi is an associate professor of Syriac and Arabic at Baylor University. He catalogued the Vööbus’ Syriac Manuscripts Collection, which is currently hosted by the Oriental Institute of the University of Chicago. In addition to many articles he has written on Moshe Bar Kepha’s works, he edited and translated Moshe Bar Kepha’s Cause of the Celebration of the Nativity. In the biblical field, he translated the Syriac Bible (Peshitta) into Suryoyo of Turabdin, and also co-translated it into Modern Standard Arabic, and the Mardini dialect. 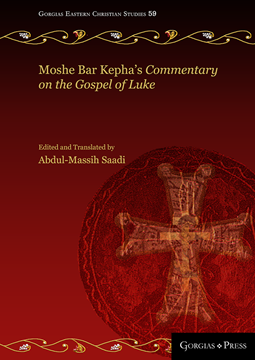 Moshe Bar Kepha's Commentary on the Gospel of Luke

Edited and Translated by Abdul-Massih Saadi
Series: Gorgias Eastern Christian Studies 59
ISBN: 978-1-4632-4221-3
Moshe Bar Kepha was a prolific writer of the ninth century. His writings reflect various aspects of West Syriac theology and ecclesiology, and his literary legacy links the earlier Syriac exegetical tradition (beginning with Ephrem) with the Syriac 'Renaissance' of the eleventh to thirteenth centuries. His use of sources crosses Christian confessional boundaries in such a way that his works are tinged with aspects of Syriac exegesis from both East and West Syriac traditions. In his Commentary on Luke, the Muslim-dominated context in which Moshe lived is clearly evident in the background, and his aim is to fortify the credibility of the Christian faith and the validity of Christian doctrines for his readers. 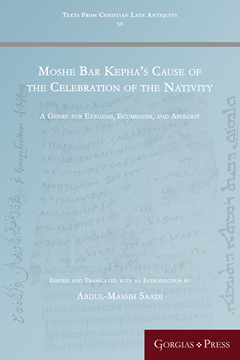 Moshe Bar Kepha’s Cause of the Celebration of the Nativity

A Genre for Exegesis, Ecumenism, and Apology

Edited and Translated with an Introduction by Abdul-Massih Saadi
Series: Texts from Christian Late Antiquity 50
ISBN: 978-1-4632-0733-5
This book is a part of series of Causes of Celebrations written by Moshe Bar Kepha (813-903). These Causes are unique in that they demonstrate a new genre of the Syriac literature initiated by the East Syriac authors at the beginning of the sixth century. Moreover, these Causes reveal the appreciation and dependency of Moshe Bar Kepha on the East Syriac sources despite the ecclesiastical doctrinal separation between the East Syriac and West Syriac churches.