Antony Mecherry S.J., Professor of Church History at the Pontifical Oriental Institute in Rome, received his PhD in Church History in 2016 from the Pontifical Gregorian University in Rome. As a Jesuit belonging to the Province of Kerala, formerly called Malabar in South India, his research chiefly employs textual and contextual analysis of the dialectical tension between faith and culture adapting into it microhistorical approaches. He explores these themes against the backdrop of recent academic interest in the early modern Jesuit mission principle and praxis of accommodatio, as well as its offshoots: adaptation, inculturation and interculturation. His latest monograph is Testing Ground for Jesuit Accommodation in Early Modern India: Francisco Ros SJ in Malabar (16th–17th Centuries),Bibliotheca Instituti Historici Societas Iesu, vol. 79, Rome: Institutum Historicum Societatis Iesu, 2019. 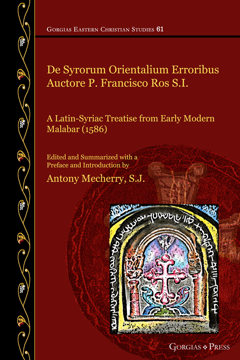 Edited and Summarized with a Preface and Introduction by Antony Mecherry, S.J.
Series: Gorgias Eastern Christian Studies 61
ISBN: 978-1-4632-4353-1
In the present work, De Syrorum Orientalium Erroribus, Auctore P. Francisco Ros S.I.: A Latin-Syriac Treatise from Early Modern Malabar (1586), Antony Mecherry S.J. brings to the fore a recently identified sixteenth-century treatise on ‘Nestorianism’ written by Francisco Ros S.J. (1559–1624), a Catalonian from the Jesuit province of Aragón, who successfully promoted the mission praxis of accommodatio primarily among the Saint Thomas Christians of early modern Malabar in South India. This newly discovered first treatise composed by Ros, a Latin missionary, represents the initial phase of his mission as a polemicist in the making, who read the Syriac sources of the Church of the East found in Malabar, through a Catholic theological lens. In addition to exploring the underlying conflicts emerged out of an unprecedented encounter of apparently unlike theological and liturgical identities in the same mission field of early modern India, this book provides the readers with a historiographical critique against the backdrop of which the author presents his analysis of the Rosian treatise.