For more information about the series or to submit a proposal, please contact the series' Submissions Editor, Adam Walker: adam@gorgiaspress.com. 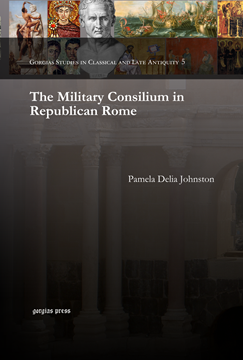 The Military Consilium in Republican Rome

By Pamela Delia Johnston
Series: Gorgias Studies in Classical and Late Antiquity 5
ISBN: 978-1-59333-373-7
The consilium, or advisory council, played an important role in the everyday activities of the Roman magistrate in his role as military commander. This work is an in-depth look at the commander's consilium from its first depicted appearances in the accounts of the legendary period to 31 BC. The concilium adapted to meet changing needs and serves to illustrate how Romans felt about their own society. The role of the commander's consilium can be seen as a pragmatic compromise between the desire for competent leadership and personal ambition on the one hand, and the Romans' ever-present fear of tyrannical behavior on the other. 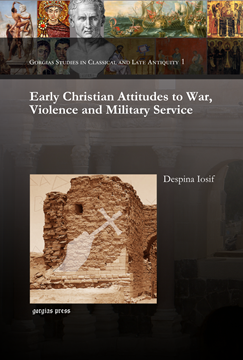 By Despina Iosif
Series: Gorgias Studies in Classical and Late Antiquity 1
ISBN: 978-1-61143-486-6
The early Christians were not of one mind when it came to war, violence and military service. There was a bewildering variety of opinion as to how they understood their place in the world. It seems however that generally they did not stand apart from society. On the contrary, they were happy to integrate and conform and they often accepted war and service in the army as activities which did not raise specific ethical problems. 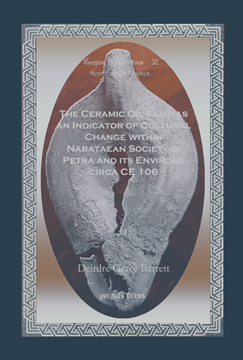 By Deirdre Grace Barrett
Series: Gorgias Studies in Classical and Late Antiquity 14
ISBN: 978-1-59333-628-8
How did the Nabataeans view their world at the time of the Roman annexation in CE 106? If it is possible to detect an altered perception after their monarchy was dissolved at that time, how can we be sure it was authentic and not a veneer, masking the identity of a disaffected people? One approach is to consider religious practice as a diagnostic for identity within Nabataean society. Religious practice is examined through the ceramic oil lamp, a ubiquitous vessel that can portray socio-political and religious symbolism and cultural hybridization.