James D. Nogalski has worked with prophetic literature for more than 20 years, beginning in Zurich where he completed his doctoral work under the tutelage of Odil Hannes Steck. Nogalski has taught at institutions in Kentucky, Illinois, and North Carolina before joining the faculty of Baylor University in 2007. Since the publication of his two influential volumes on the Book of the Twelve, he has collaborated on numerous projects related to the formation of prophetic writings. In addition to his own writings he has edited collected works, translated four books, served on editorial boards of two journals. He has also served in leadership roles for the Society of Biblical Literature since 1993. 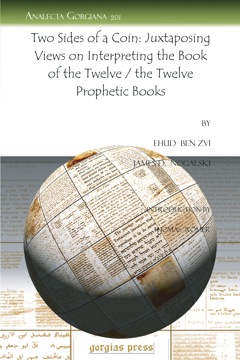 By Ehud Ben Zvi & James D. Nogalski; Introduction by Thomas Römer
Series: Analecta Gorgiana 201
ISBN: 978-1-60724-303-8
A conversation between James D. Nogalski and Ehud Ben Zvi on the question of The Twelve, its implications for the historically oriented study of the prophetic books in the Hebrew Bible, and for the reconstruction of the intellectual history of ancient Israel.