Dr Jennifer Griggs pursued her doctoral research on Eastern Christian mysticism at the School of Oriental and African Studies (SOAS), University of London. As part of her postdoctoral work, Jennifer has worked on the interaction of Syriac Christianity with the late Avicennan tradition of philosophy in the Islamic East. She was a Visiting Fellow with the Centre for Religious Studies (CERES) in 2018, at the Ruhr Universität Bochum in Germany, and a Postdoctoral Fellow until 2021, with the Research Training Group Shaping Religious Difference: Pluralism in Christianity and Islam, at the University of Osnabrück, Germany. Jennifer is currently an occasional lecturer in interreligious and intercultural studies at the University of Osnabrück and works freelance for the British Institute for the Study of Iraq in London. 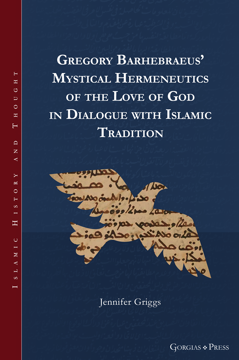 By Jennifer Griggs
Series: Islamic History and Thought 23
ISBN: 978-1-4632-4247-3
An inquiry into the mystical thought of Gregory Barhebraeus, offering a reading of Barhebraeus’ mystical texts by bringing them into conversation with critical religious studies and the hermeneutical tradition of philosophy.
$133.00 $93.10