Jovan Stanojević is an auxiliary bishop of the Serbian Orthodox Church in Germany. He studied theology at the priestly seminary in Sremski Karlovci and at the theological faculty of the University of Belgrade, where he graduated in 2009. He earned a master’s degree in theology at the Holy Cross Greek Orthodox School of Theology in Brookline, Massachusetts in 2011. In 2019, he was awarded a doctorate from the Bergische Universität in Wuppertal, Germany. He is currently working as a research associate in Wuppertal at the Institute of Septuagint and Biblical Text Research on the project Die Paratexte zur neutestamentlichen Johannesapokalypse in griechischen Handschriften. 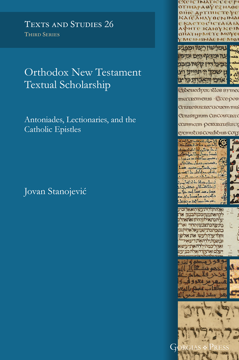 Antoniades, Lectionaries, and the Catholic Epistles

By Jovan Stanojević
Series: Texts and Studies (Third Series) 26
ISBN: 978-1-4632-4267-1
The present study represents the first attempt to expand the methodological and practical framework of textual scholarship on the Greek New Testament from an Orthodox perspective. Its focus is on the Antoniades edition of 1904, commonly known as the Patriarchal Edition. The examination of the creation and reception of this edition shows that its textual principles are often misrepresented. In particular, it is shown to be more closely related to the Textus Receptus than to lectionary manuscripts. This is confirmed by an analysis of lectionary manuscripts using the Text und Textwert methodology and a detailed comparison of the Antoniades edition with the recent Editio Critica Maior of the Catholic Epistles. A textual commentary is provided on key verses in order to formulate guidelines for preparing an edition of the Greek New Testament that would satisfy the needs of Orthodox users in different contexts. This study offers a foundation for the further development of New Testament textual scholarship from an Orthodox perspective, informed both by modern critical scholarship and Orthodox tradition. It also provides a fresh translation of Antoniades’ introduction in an Appendix.
$114.95