Katharina Streit, born 1985 in Wiesbaden, Germany, studied Cultural Anthropology, Prehistory, and Near Eastern Archaeology at the Albert-Ludwig-University of Freiburg, the University of Oxford and at the Hebrew University of Jerusalem. She is currently a researcher at the Austrian Academy of Sciences. From 2013 to 2016, Katharina Streit directed excavations at the Neolithic-Chalcolithic site of Ein el-Jarba (Israel), and since 2017, she is co-directing the Austrian Expedition to Lachish together with Felix Höflmayer. 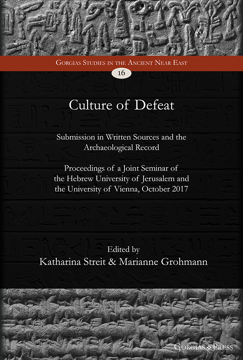 Submission in Written Sources and the Archaeological Record. Proceedings of a Joint Seminar of the Hebrew University of Jerusalem and the University of Vienna, October 2017

Edited by Katharina Streit & Marianne Grohmann
Series: Gorgias Studies in the Ancient Near East 16
ISBN: 978-1-4632-3920-6
Culture of Defeat is based on a 2017 conference focusing on the impact on, and responses by, the defeated parties in conflicts in the ancient Near East. Shifting the focus of analysis from the conqueror to the vanquished, the (re-)examination of written sources and the archaeological record sheds new light on the consequences and reactions after often traumatic defeats and allows to gain a more nuanced and complete picture of such events.
$114.95