Megan Burnett (Ph.D., New Orleans Baptist Theological Seminary) is a researcher at the Institut für neutestamentliche Textforschung at the Westfälische Wilhems-Universität Münster. Dr. Burnett previously served as a Project Director for H. Milton Haggard Center for New Testament Textual Studies at NOBTS and as a Research Coordinator of the Greek Paul Project for the Museum of the Bible Scholars Initiative. Currently, she is serving a postdoctoral fellowship implementing revisions for the Nestle-Aland Novum Testamentum Graece 29th edition and the United Bible Societies Greek New Testament 6th edition. 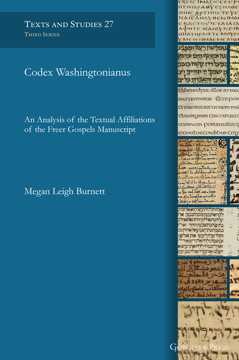 An Analysis of the Textual Affiliations of the Freer Gospels Manuscript

By Megan Leigh Burnett
Series: Texts and Studies (Third Series) 27
ISBN: 978-1-4632-4451-4
This book investigates the biblical text of Codex Washingtonianus, also called the Freer Gospels, Codex W and GA 032. There are numerous distinctive features in this early and important gospel book, including the differing affiliation of its text in separate sections (known as block mixture). The study examines and evaluates the blocks of text in this manuscript through the extensive application of the technique of quantitative analysis, which sheds light on the textual relationship between Codex Washingtonianus and other gospel manuscripts. Paratextual features, orthographic variations, and singular readings are also described and analysed. This book thus functions as an investigation of the phenomenon of block mixture in itself as well as the character of this particular manuscript, confirming many of the findings of previous scholarship and providing new data from the context of modern research.
$114.95 $91.96