Radu Mustaţă is doctoral candidate in Medieval Studies at the Central European University (Budapest). He holds an MA in History and Medieval Studies from the same institution and a BA in Classical Philology from the University of Bucharest. He is also an associate researcher in the project Jews and Christians in the East: Strategies of Interaction between the Mediterranean and the Indian Ocean, a European Research Council project at the Center for Religious Studies, Ruhr University Bochum, Germany. 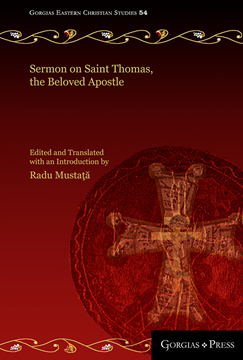 Translation and Introduction by Radu Mustaţă
Series: Gorgias Eastern Christian Studies 54
ISBN: 978-1-4632-3902-2
A study of a homily in praise of Saint Thomas, written in Syriac by a Catholic missionary. The homily, which is preserved in two manuscripts, is an important witness to the interaction between the Indian Syrian Christians and the Western Catholic missionaries.
$78.65 $55.06