Tony E. Nasrallah is an instructor of Civilization Studies at the American University of Beirut and an associate researcher at Notre Dame University (Lebanon). He has co-edited a book by Charles H. Malik on the philosopher Alfred North Whitehead, and has published a number of academic articles. Nasrallah has a Master’s degree in History from the American University of Beirut, and is currently writing a Ph.D. dissertation at the Université Saint-Joseph in Beirut. 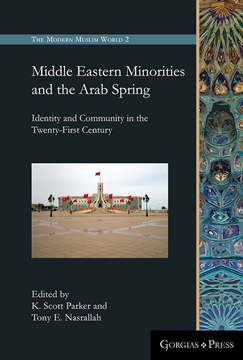 Identity and Community in the Twenty-First Century

Edited by K. Scott Parker & Tony E. Nasrallah
Series: The Modern Muslim World 2
ISBN: 978-1-4632-0653-6
Middle Eastern Minorities and the Arab Spring: Identity and Community in the Twenty-First Century examines eleven minority groups in the early years of the so-called Arab Spring. Wide-ranging in scope, minorities of diverse religious and ethno-linguistic backgrounds are included from North Africa, the Levant, and the Arabian Peninsula. Each has experienced the Arab Spring differently and uniquely depending upon their context. Of particular concern to the international team of scholars involved in this volume, is the interaction and reaction of minorities to the protest movements across the Arab World that called for greater democratic rights and end to respective autocratic regimes. While some minorities participated in the Arab Spring, others were wary of instability and the unintended effects of regime change – notably the rise of violent Islamism. The full effects of the Arab Spring will not be known for years to come, but for the minorities of the Middle East, the immediate future seems certainly tenuous at best.
$170.00