Dr Essam Ayyad received his PhD in the history of Islamic civilization from the University of Leeds, UK, in 2011. He is currently working as an assistant professor of Islamic history at Qatar University. Before joining Qatar, he was elected to Imam Tirmizi Visiting Research Fellowship at the Oxford Centre for Islamic Studies, a recognized independent centre of the University of Oxford. He joined Oxford as a visiting research fellow during Trinity Term 2016. Earlier in 2015, Dr Ayyad joined the Centre of Islamic Studies, University of Cambridge as a visiting scholar. His main interest is to explore the array of prompts and modalities that shaped the various aspects of Islamic civilization, with most of his studies centring on the early period. 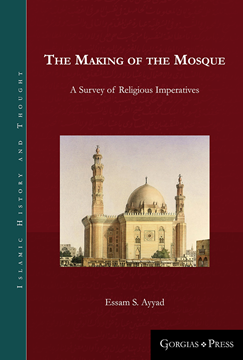 The Making of the Mosque

A Survey of Religious Imperatives

By Essam Ayyad
Series: Islamic History and Thought 15
ISBN: 978-1-4632-0727-4
“In the absence of reliable archaeological evidence, the question of how the mosque was made represents a real challenge. Its origin remains moot despite many attempts to settle the question. This study sets out to explore whether early Islam, within the framework of the Prophet’s teachings and practices, as well as the Qurʾān, might have provided the necessary prompts for the making of the mosque and the shaping of its essential functional and architectural features. It also investigates how such religious prompts may have interacted with the political, cultural and socio-economic contexts in which the mosque type materialized. As such, this book scrutinizes two dominant tendencies regarding the mosque type, the modern Western views on its non-Islamic origins and the Islamic legalist views on what it should look like.”
$149.50